Call for Submissions: Journal of Literary Onomastics 5 (2016)
(a special issue on place and place-names in the early Insular world)
The deeply rooted importance of landscape, place, and place-names is a shared characteristic throughout the Insular cultures of the early Middle Ages, ranging from the material to the literary. From examinations of the early Irish dindshenchas tradition to recent archaeological investigations into the role of landscape in socio-political structures, the study of place has begun to receive more critical attention. We seek papers that treat the issue of landscape in the early Insular world from a variety of methodologies and approaches for a volume that will appear as a special issue of the Journal of Literary Onomastics (peer-reviewed).
Abstracts of 250 to 500 words should be sent to either Bryan Carella (bcarella@assumption.edu) or Joey McMullen (mcmull@fas.harvard.edu) no later than July 7, 2015.
Accepted articles should be approximately 6,000 to 8,000 words in length (including notes) and must be received no later than January 4, 2016.
Posted by Unknown at 1:30 PM No comments:

Second, it will offer training to transcribers joining the Canterbury Tales project, and to scholars leading transcription teams within the project.  The project is undertaking the transcription of all 30,000 pages of the 88 pre-1500 witnesses of the Tales (18000 pages already transcribed but requiring checking; 12000 needing new transcription). Participants will be given accounts within the Textual Communities implementation of the Canterbury Tales project, introduced to the transcription system, and undertake their first transcriptions of pages from the Tales.  See http://www.textualcommunities.usask.ca/web/canterbury-tales/wiki/-/wiki/Main/Becoming+a+transcriber.

Third, it will offer an introduction to the principles of manuscript transcription for digital editions to any scholars or students considering undertaking a digital edition project based on a manuscript. The materials of the Canterbury Tales project will be used as a starting point for discussion of transcription, supplemented by reference to other textual traditions on which the workshop leaders have worked (including Dante, medieval Spanish and New Testament Greek).

There is no charge for this workshop, but places will be limited.  Please contact Barbara Bordalejo barbara.bordalejo@kuleuven.be or Peter Robinson peter.robinson@usask.ca to confirm attendance. For accommodation, see http://www.leuven.be/en/tourism/staying/index.jsp.
This page is also at http://www.textualcommunities.usask.ca/web/textual-community/blog/-/blogs/first-textual-communities-workshop-11-12-june-2015 and at www.arts.kuleuven.be/digitalhumanities/activiteiten.

Posted by Unknown at 1:24 PM No comments: 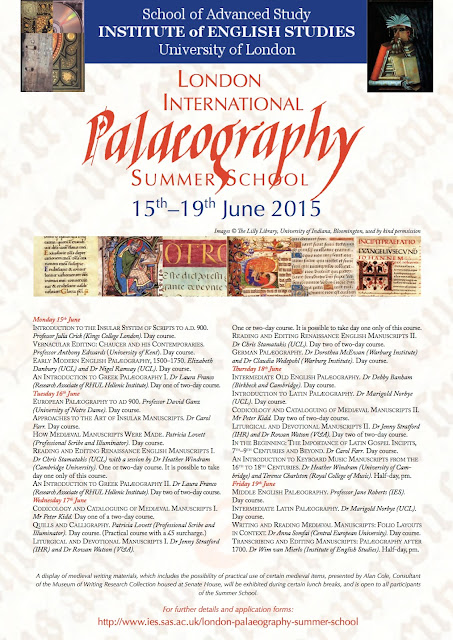 Posted by Unknown at 1:06 PM No comments:

The Ecology of Meter: Meter and Language – Meter and Literature – Meter’s Past, Present and Future A Special Issue of RMN Newsletter (February 2016)

The Ecology of Meter
Call for Papers

Metrics is sometimes described as discipline run by people who spend their lives counting syllables. Nothing could be farther from truth – poetic meters do not exist in a mathematical vacuum, and knowing the number of syllables, feet etc. per line rarely equals knowing what a given meter is and how it works. Meter is a creative tool that shapes, and is shaped by, language (John Miles Foley used to talk about “trademark symbiosis between metre and language”), tradition, textual and social environments, as well as other co-existing meters and ultimately the people who use, abuse and transmit texts composed in it. The combined action of these factors, seemingly extra-metrical, constitutes in fact what we would like to call the ecologly of meter. Meter is a living thing of  language(s) and literature(s) that depends on this ecology as much as the poetry itself; the two, consequently, can (and should) be approached from a variety of angles and studied by a variety of methods that touch upon and connect different aspects of a meter’s ecology. 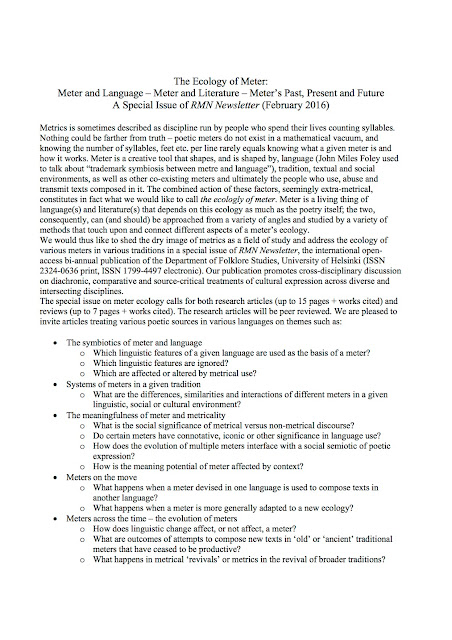 Posted by Unknown at 1:02 PM No comments:

You are cordially invited to participate in the 2015 meeting of the Southeastern Medieval Association. This year’s meeting will take place at the Wyndham Riverfront Hotel in North Little Rock, Arkansas on Thursday, October 22, 2015 through Saturday, October 24, 2015, and is sponsored by the University of Central Arkansas.

The theme of this year’s meeting is “Heaven, Hell, and Little Rock,” in celebration of a host of anniversaries celebrated this year (the Fourth Lateran Council, the 750th anniversary of Dante’s birth, the burning of Jan Hus, the signing of the Magna Carta). We welcome submissions and encourage panels related to these anniversaries or on other medieval topics. Further, in acknowledgment of the pivotal role that Little Rock, this year’s conference location, played in the American civil rights movement. In the spirit of this significant step in; the civil rights movement, we would like to encourage for this conference an emphasis on the “Other” Middle Ages, and encourage panels on East Asia, South Asia, and Islam at the time of the European Middle Ages, as well as panels on the “Other” within medieval Christendom (e.g., Jews and other non-Christians, Norse encounters with “Skraelingas,” or the treatment of the disabled, diseased, sexually “deviant,” or “mad” in Christian society).

In addition, this year’s meeting will include several sessions devoted to undergraduate research. Please encourage students who have done especially good work to submit abstracts.

Please submit proposals for sessions and individual papers using the link at http://goo.gl/forms/KDyCGVPqoN no later than July 1, 2015.

Plenary Speakers:
Dr. Peter S. Hawkins of the Yale Divinity School (author of Dante’s Testaments: Essays on Scriptural Imagination and Dante: A Brief History among others) will give a plenary address called "Dante's 'Other': Thinking outside the Christian Box."

Dr. Thomas A. Fudge of the University of New England (author of Heresy and Hussites in Late Medieval Europe and The Trial of Jan Hus: Medieval Heresy and Criminal Procedure, among others) will give a plenary address on Hus and his martyrdom.

Dr. Stephen Owen of Harvard University (author of The Late Tang: Chinese Poetry of the Mid-Ninth Century (827-860) and The Making of Early Chinese Classical Poetryamong others) will give a plenary address on Tang poetry and culture.